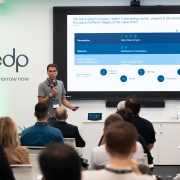 Idenergy was selected to participate in EDP Starter’s latest cohort of promising energy companies. The latest EDP Starter bootcamp took place from July 4th through July 7th, in Oviedo, Spain. As part of this event, Idenergy, represented on site by its CEO Pierre Blanchet, was one of eight select companies to discuss potential pilot deployments with EDP stakeholders, who are looking to invest in new technologies to accelerate the transition toward a greener, more resilient electricity grid.

EDP is a major utility based in Portugal, with a worldwide presence and particularly significant operations in Brazil, Spain and the United States. 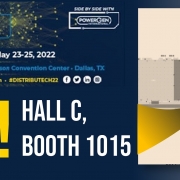 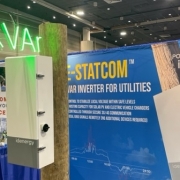 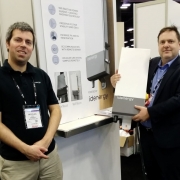 The Center of Excellence in Energy Efficiency (C3E) is investing in IDENERGIE inc. to support the commercialization of its next-generation fanless, tranformerless smart inverter systems and battery chargers. This investment was made possible thanks to the financial support of Transition Énergétique Québec to support innovative projects in the field of transportation energy efficiency at the pre-commercialization stage.

“C3E’s investment in IDENERGIE inc. will accelerate the introduction of distributed energy on the electricity grid and, in particular through storage, will help mitigate peak electricity consumption, which will be amplified by the increasing presence of electric vehicles. Fixing suddenly the problems of instabilities of voltage on the networks caused by the increase of the number of electric vehicles charges over the next years, the IDÉNERGIE’s inverters are a step ahead on the market“, says C3E CEO Mr. Donald Angers.

“IDÉNERGIE’s primary goal is to become a player of excellence in electrical conversion, stabilization of distribution lines and a world leader in the control of wave quality. The short-term challenge is to build the sales, installation and customer service network with professional installers and utilities, and that’s where C3E’s assistance is most critical“, says Mr. Pierre Blanchet, IDÉNERGIE’s president and CEO.

IDÉNERGIE inc. is a power electronics company specialized in behind-the- meter and low-voltage converter development with an emphasis on telecommunication and high-frequency switching technologies. IDÉNERGIE’s vision is to develop next-generation smart inverters that will enable massive adoption of residential Distributed Energy Resources (DER), while providing grid optimization services to utilities.

In 2015, building on its experience in developing converters, the company made a shift to focus its activities on the development and commercialization of its solution, which represents a unique opportunity to penetrate this multi-billion dollar market.

The Center of Excellence in Energy Efficiency (C3E) is a center set up by its two founding members, Rio Tinto Alcan and Hydro-Québec, whose mission is to help companies commercialize their innovations in the field of energy efficiency in transportation. With the financial support of TEQ (Transition Énergétique Québec), the sums required to grant this financial support are taken from the Fonds vert, from those provided for in measure 96.5 of the TEQ 2018-2023 Master Plan.

Transition Énergétique Québec is a government-owned corporation whose mission is to support, stimulate and promote energy transition, innovation and efficiency, as well as to coordinate the implementation of all programs and measures necessary to achieve the energy targets, as set by the government. A three-year partnership agreement was signed between Transition énergétique Québec and C3E with financial support of $4 million from energy distributors. This new partnership is perfectly in line with the objectives pursued in Québec’s Master Plan for Energy Transition, Innovation and Energy, which is to maximize the benefits of public and private investment by pursuing and adapting government support for energy innovation, particularly by supporting pre-commercialization. 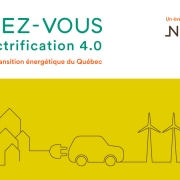 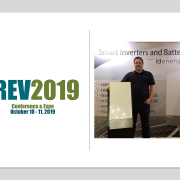 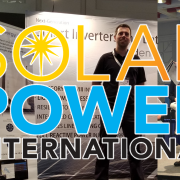